Best Podcasts Animators Should Listen to In 2021

Home » Animation » Best Podcasts Animators Should Listen to In 2021 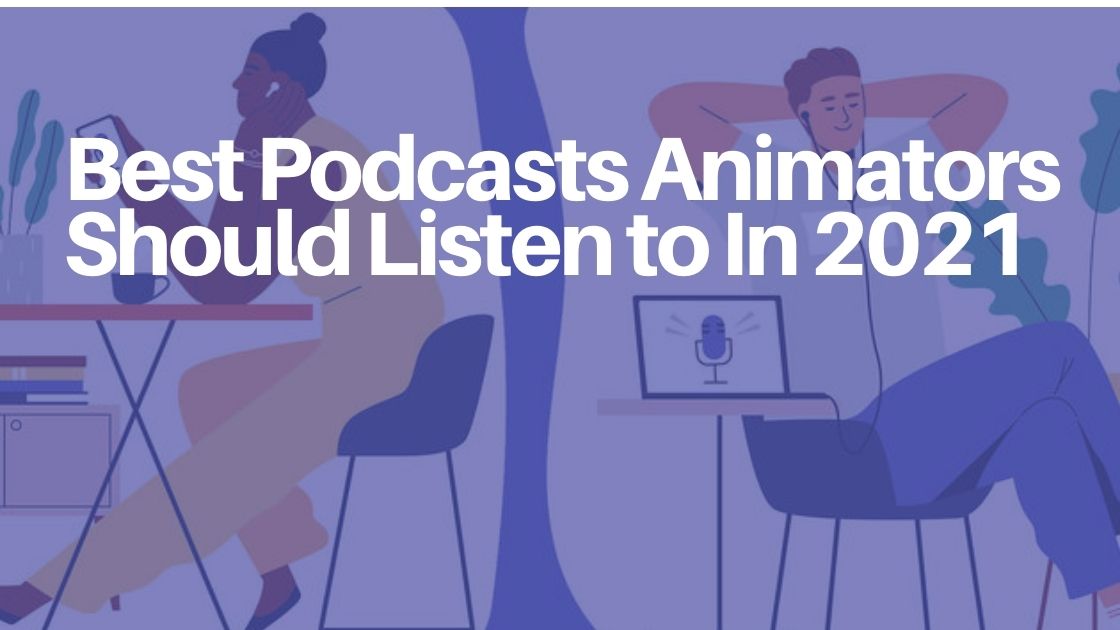 Animations have always been that one thing that seemed like something you needed to go to school to learn all about, but with the growth of the internet, that doesn’t seem so true anymore. People who like to study on their own and learn new things can now learn how the world of animations works while doing other things too! Wondering how that’s possible? Well, through Animators Podcasts!

Animators Podcasts are created by Animators themselves. Some review big productions like Disney movies and others go in depth about their own careers working as animators themselves. Their hands-on knowledge can help you understand how it is to work in the animations industry the way books can’t teach. So they’re definitely a resource you should look into if you’re thinking about getting into the world of professional animations!

5 Best Podcasts Animators Should Listen to In 2021

If you’re ready to get learning, grab your phones and pick a podcast from our list of the best animation podcasts that you should be listening to in 2021:

The Animation Addicts Podcast is hosted by Morgan Stradling, Chelsea Robson & Mason Smith. Smith is an animator himself while Stradling and Robson are experts in all things animation. Their podcast has been up and running for almost a decade now, the first episode aired in 2012. They talk about everything, from simply reviewing their childhood favorite animations from Disney, Pixar, and Dreamworks, to doing an in-depth analysis of the movies and short films that come out today! As a bonus, they also have animators from giant corporations like Disney come onto their show and talk about the behind-the-scenes aspect of making the movies! It’s basically like a one-stop-shop to learn everything about the world of animations!

The Animation Industry Podcast is hosted by Terry Ibele, who is a stop motion animator himself. Ibele really takes you into the world of animations. He’s someone that began his own career without anyone’s help, so he’s made his fair share of mistakes that he doesn’t want anyone else to make. To ensure that, he spills all the secrets. Starting with what skills you will need to get into the specific side of animations you want to get into, whether it be character design, visual development, or even storyboarding. He’ll tell you everything you need to know and what’s a waste of time. Beyond that, he talks about his method of pitching for shows and how you can market your work online. Even if you think your work is unmarketable, he’ll teach you how to mold it in a way that your pitches never go to waste! On top of that, almost every episode features a guest who’s been working in the field too so you can learn about their journeys together and get all the insight you could ever need!

The Directing Animation Livecast comes from host, Scott Wise. Wise is a director who has worked on his own films. He started his podcast by discussing everything that went into creating his own film. Everything from the idea to the finished product, he guided his listeners through it all. The show isn’t very old, it only first began in 2020 so there aren’t a lot of episodes but, each episode is about 40-50 minutes long and is packed with information. His podcasts now feature different producers and directors that join along to explain their own journeys and give the listeners insight into what “the other side” is looking for when they’re pitching their idea. This way, you can learn about what it’s like to make the films and what’s expected of them once they’re done!

Dave Koss and Matt Milstead are the hosts of the Mograph Podcast. Both of them have extensive experience in the video and motion graphics industry. They’re people who love what they do. So much that they decided to share everything they’ve learned over the years with the people that are looking to get into animations today. Their podcasts have everything. You can learn about different softwares like After Effects and Octane and everything that goes into making animations. However, what puts their podcast above several others is that they also go into the background of things. You can learn everything about how to draft contracts and spot loopholes, how to deal with clients to make sure you’re not being taken advantage of, and how to overall use your time as an animator, efficiently. The podcast started off in 2015 and as of right now, there are almost 300 episodes already, so there’s a lot you can learn here!

Hector Navarro hosts the Nick Animation Podcasts. These podcasts are great for people that grew up obsessed with Nickelodeon and always wondered how these shows came to be. Not only does this podcast take you through what it’s like to be an animator, but they also feature animators and voice actors from some of the biggest shows in Nickelodeon history! They do deep dives into shows like Jimmy Neutron and Spongebob and you get to hear from the people who worked at the shows firsthand what it was like being part of the creative teams! It’s basically priceless information that wouldn’t really be available anywhere else.

Going through any or all of these Animators Podcasts will be enough to teach you about the ins and outs of the world of animations. You get to learn about all the best software, the way the development side of things works, how you pitch your shows, and most importantly, what not to do while working on your own animations! All of that information, in one place! Listen to these podcasts and you’ll be able to go into the animations industry like you’re already a pro!

Video For Any Mission.

Chat to get 50% Discount
Book a Call